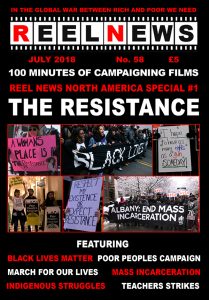 Protestors at New York state government in Albany testify to the horrors of the modern slavery that is mass incarceration.

Thousands of students march for gun controls, joined by students from the Florida school that kickstarted this huge movement.

Relaunch of the 1968 campaign that Dr. Martin Luther King was working on when he died, and probably got him assassinated.

Direct action in Sacramento from week 2 of the campaign that has seen over 2,000 people arrested already.

The powerful movement in Oakland that led to Occupy and Black Lives Matter demands more transparency, in the state with more police murders than any other.

The campaign for a full public inquiry into the police riot at Orgreave goes from strength to strength.