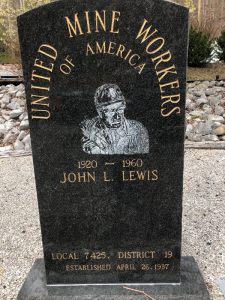 From Minnesota we moved onto the Appalachian mountains of Harlan County, Kentucky, where we had the privilege and pleasure of being shown around the area by Mike Obradovich, ex-miner and guide at the Kentucky mining museum, and Carl Shoupe, one of the organisers of the 1973 Bridgeside miners strike – the subject of Barbara Kopple’s seminal 1976 Oscar winning film, Harlan County USA. If you haven’t seen it, give yourself a treat this Easter and click on the link below – one of THE great films on working class struggle, and a real insight into the extreme violence the U.S. labour movement was confronted with throughout its history.

Carl is now a leading campaigner in the struggle to end coal and move to an economy based on renewable energy in the area, in an attempt to combat climate change, save the beautiful mountains that are being ravaged by strip mining, stop the logging operations that are causing dangerous flooding by removing the forests that are a flood barrier, and create the jobs that are so badly needed – since the mining companies shut down the underground mines, having mined every last bit of coal and not put any plan in place for a just transition for the workers, the population of Carl’s hometown of Lynch has dropped from 9,000 to just 900.

Incidentally, Carl also pointed out that although the state of Kentucky voted for Trump in the last election, the turnout was pitiful … just 18-20%. So white working class voters in the area were NOT voting to bring coal back, they simply didn’t vote at all – and racist voter suppression laws ensured that many Kentuckians weren’t even able to vote (more on that later).

Carl also introduced us to his 15 year old grandson Chase Gladson, one of many amazing organisers fighting for a future to alleviate the extreme poverty in the area, and another indication of the new young generation of militants rising up everywhere we visit in North America. Both are members of Kentuckians for the Commonwealth – a hugely impressive social movement in the state, originating in 1981 and now boasting 10,000 members.

Film length: 12:57 A major campaign is growing in the USA to finally combat shocking levels of deprivation – 43.5% of the population are now living in poverty. Based on the campaign that Dr. Martin […]