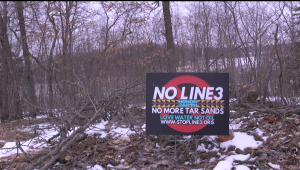 In the second half of March we went to the snowy plains of Northern Minnesota to the White Earth reservation, home to the Ojibwe First Nation. This is where activist have set up Camp Turtle Island, a permanent camp based on traditional ways of living and interacting with the earth, which is getting ready for the next big pipeline battle after Standing Rock – the new A3 pipeline through Minnesota, a huge expansion of an existing pipeline which will be designed to take bitumen from the tar sands in Alberta to be refined into oil elsewhere – some of it in the USA, but most of it elsewhere in the world.

As camp leader Bill Poulson explained to us, it’s a final attempt to move as much bitumen out of the area, and squeeze as much profit out of the tar sands as possible before the industry collapses. The local water sources will be put in grave danger, and the pipeline will be diverted through the wild rice fields of the Ojibwe – an essential and central part of their culture, and yet another treaty violation to even consider disturbing them – to say nothing of the huge damage to the climate in continuing this operation. Oil spills are another major concern, with corners being cut on safety in the rush to build new pipelines. Just recently there was a 210,000 gallon oil spill in South Dakota from a brand new pipeline.

The environmental impact assessment for the pipeline has just gone through with none of the numerous objections being upheld – which paves the way for a full go ahead in June, which is when they will need people to come en masse to protect the earth once again. In fact Camp Turtle Island was set up originally as a calming place for people to recover from Standing Rock – many people experienced PTSD as a result of the violence of the state forces, and we were told horrendous stories of water cannons being used in below freezing conditions, vicious beatings of unarmed peaceful protestors, chemical warfare from share cropper planes and much more.

But we also learnt what a seminal, magical event the Standing Rock struggle was. Gypsy Foote described it as a struggle that called to her heart, rather than her head, and a meeting of First Nations unparalleled in modern history, which unleashed an extraordinary power – a feeling echoed by other indigenous (and non-indigenous) activists we’ve met across the continent. The thousands upon thousands of people who bravely took a stand there haven’t gone away – they’ve gone back to their communities and are continuing, and expanding, the struggle.

Standing Rock also served as a way of reconnecting people with a culture that the state has gone to great lengths to cut them off from. Gypsy herself went from Standing Rock to take part in a three month Long Walk across North America, replicating the long walk suffered by her ancestors when they were thrown off their land, learning more about her culture, and learning more about the different First Nations cultures she encountered on the way.

The people at Camp Turtle Island, all veterans from the frontline of Standing Rock, don’t expect a struggle of that huge significance to happen again – but they do expect, and need, another huge gathering of people to fight the new A3 pipeline if, as expected it gets the go ahead in June. For updates, and to find out how you can support the resistance in person or from afar, go to the Stop Line3 website.

And for the best film by far on Standing Rock, check out the film “Black Snake Killaz” by Minnesota frontline videoactivist collective Unicorn Riot.

March For Our Lives: St.Paul/Minneapolis

Film Length: 11:37 Thousands of students join the March For Our Lives to the State Capitol in St.Paul, Minnesota – one of over 800 marches across the USA, as over one million march in Washington. […]

In 2018, Reel News went on a 14 week tour of North America to look at grassroots struggles around climate change, particularly struggles around a “just transition” from fossil fuels to renewable energy, where workers […]