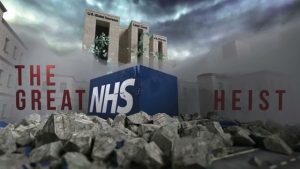 Given the imminent threat to the NHS, the makers of this film have decided to give free access to “The Great NHS Heist” film, in the run up to the General Election. They say: “Information is the lifeblood of democracy & to this end we hope this film will help you decide how to vote and become active citizens in the defence of the NHS.” Featuring detailed information on the plan to privatise the NHS by stealth which has been going on for 30 years now, with extensive interviews with health care professionals, NHS whistleblowers, campaigners, academics and policy experts, anyone who sees this film will never vote Tory again. An awful lot of people in the country still don’t know any of this is happening – this film will help you explain the full horror of what’s already happened, and what’s coming.