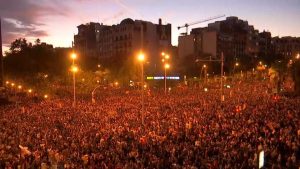 Protests are escalating over the outrageous sentences meted out to Catalan government ministers and civil society leaders for daring to hold an independence referendum two years ago. 13 years for Oriol Junqueras, former vice-president of the Catalan Parliament and leader of the moderate Republican Left party; 10 – 12 years for other government ministers; 9 years for Jordi Cuixart and Jordi Sànchez, key activists in moderate civil society organisations who did no more than call peaceful demonstrations.

The disgraceful actions of the Spanish state may well backfire as the revolt is increasing hour by hour.

Already there have been motorways and railway lines blocked all over Catalonia, city centres occupied with burning barricades holding Spanish and Catalan police at bay, a huge battle at Barcelona airport on Monday which was occupied and then attacked by police leading to over 130 injured (and over a hundred flights cancelled) – and now a general strike has been called for Friday October 18..

We want to send two people from Reel News to Catalonia in solidarity with the struggle for justice and to send back proper information on what’s going on – but we need your help to raise the cash to get there. If you or your trade union branch can help us, click on the “Donate” button below. 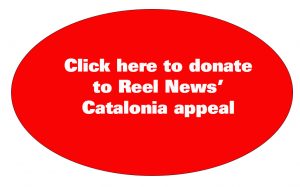 If you can help, click on the red button above, go down to the bottom of the page that opens and press “Donate”  – or if you prefer not to use Paypal, you can make a bank transfer to Cooperative Bank account REEL NEWS, acct no 65265026, sort code 089299. Thanks!

We’re aiming to get there in time for the big demonstration for justice called in Barcelona for Saturday Oct 26, and then stay for a week to take part in events as they unfold. We’ll need to go by land., partly because of our normal policy of not flying in Europe because of the carbon footprint, and partly because the airport may well be blockaded again. So we reckon we need £1,200 to cover all the costs for two of us.

Video of the astonishing scenes at Barcelona airport on Monday 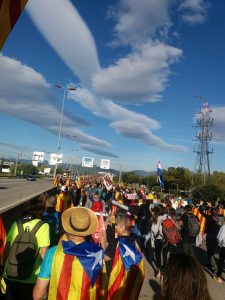 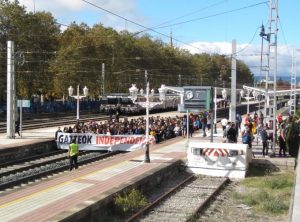 Solidarity actions happening all over Spain. This is on a trainline outside Vitoria in the Basque country today … and just to emphasise the enormity of what’s happening in Catalonia right now, look at this video of the solidarity demonstration in Madrid on Wednesday.

Demos this size quite simply didn’t happen outside Catalonia in response to the extreme police violence during the referendum two years ago – but they are happening now.

If you think this is important as we do, please help us get over there!