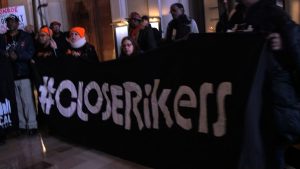 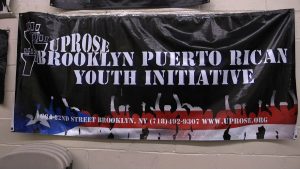 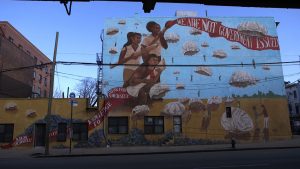 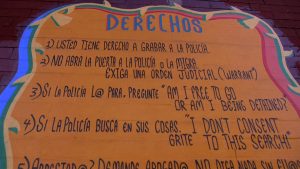 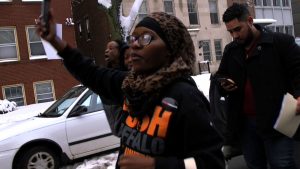 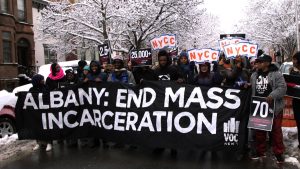 Over the past two weeks we’ve visited Buffalo and New York, where we’ve been privileged to meet some amazing community activists.

We started off in Buffalo, where we met PUSH Buffalo (People United for Sustainable Housing), who operate in the Upper West Side – the poorest neighbourhood of the third poorest city in the USA, devastated after the steel industry left 20 years ago. Now it’s a multicultural community which is home to over 60 nationalities and cultures, including many refugee communities, particularly recently from Somalia and Burma – and unusually for the States it’s a very integrated community. PUSH Buffalo are doing some incredible work in fighting police oppression (two young black men were murdered by the police in Buffalo in 2017 – Wardell “Meech” Davis and Jose Hernandez Rossy), acquiring land and buildings off the council and turning them into affordable housing with retrofit insulation and renewable energies to combat fuel poverty and climate change at the same time, training and creating jobs in renewable energy, and getting out on the streets to try and spread their model of organisation across the state. They are also training up many of their young people to become community organisers themselves, and the ones we met – all between 13 and 18 years old – were inspiring in their understanding of capitalism, gentrification, climate change and how they were going to go about fighting back.

Then onto New York City … initially a bit depressing to see the contrast between moneyed hipsters and seriously poor people and a lot of people suffering from mental health issues on the streets in gentrified Brooklyn, but there’s a serious fightback being waged by local activists (mainly Puerto Rican and black) that we’ve learnt loads from.

We went to a great protest over mass incarceration in Albany, the government for New York State – 70% of people locked up in jail in the state are formally innocent and are only there because they can’t meet bail (often $25,000 for petty crimes) and can’t call on evidence proving their innocence prior to trial – which they can wait up to three years for. They’re all dumped in Rykers Island, a lot of them as young as 16, where they work for 16 cents a day producing essential items for the economy – in other words, slavery still exists.

Some awful stories as people testified at the demo, including Priscilla, who told us she couldn’t afford bail for something she didn’t do – then pleaded guilty when told her kids would be taken into care if she didn’t plead guilty. Ended up in jail anyway and didn’t see her kids for months, lost her fashion business (she was earning $1500 a week and went down to $300 a month – is only improving financially now) and the relationship with her kids, and other kids in her neighbourhood who looked up to her and cane to her for help and guidance, has been seriously damaged.

We’ve yet to meet anyone black or Latino or white working class in the States (which covers pretty much everyone we’ve met) who’s not either been in jail themselves or knows someone in their family who has.

Then we spent a bit of time with UPROSE, an inspiring activist group working out of a shopfront in the latino (Puerto Rican and Mexican) community of Sunset Park in Brooklyn who were great – introduced us to some of their youth organisers who were all 17 years old, started when they were 13 and were seriously impressive – very focussed on climate change, fighting gentrification, bringing about a just transition for their community and working out what that would mean, and have obviously had some significant victories, including stopping a new power station being built next door to them (very rare in any country).
They also told us about the grassroots self-organisation they’d done to help with a just recovery after the flooding in Puerto Rico, and in New York City after Superstorm Sandy – which was a watershed moment for many New Yorkers in realising something had to be done about climate change, and led to the 400,000 strong climate march in 2014 and a subsequent ban on fracking in the state.
UPROSE organise a youth activist conference every year with teenagers coming from all over the state and beyond, led by the youth, where they exchange experience and skills, have political discussions and organise direct action training. They said they’d love people from the UK to come, so if there’s any young activists out there who’d like to go over, or activists working with youth who are interested in trying to raise the funding for a visit, get in touch with us and we’ll link you up.
The community itself was great fun, very proud, resilient and friendly, lots of fresh fruit and vegetables in the shops and delicious cheap Mexican and Puerto Rican restaurant/sbars.
So far it seems that Trump’s election has served as a galvanising force, uniting groups who haven’t worked together before, and provoking a determination to change things from the bottom up. More news soon …

Running Time: 5:24 Local campaigners shut down Edmonton on Sunday as the struggle to stop the expansion of the Edmonton Incinerator gathers pace. Already one of the most polluted areas of the country, the area […]

(Article by Elly Hancock, May 27 2021: Many thanks to BLM activist Natalie for sending it to us. Original article here.) In 2020, Black Lives Matter became a mainstream political and cultural movement that spread […]

In 2018, Reel News went on a 14 week tour of North America to look at grassroots struggles around climate change, particularly struggles around a “just transition” from fossil fuels to renewable energy, where workers […]